Nokia, the Finnish handset maker, recently announced their N900 Internet Tablet.’a0 How is an Internet Tablet different than a Nokia smartphone?’a0 Well, with this latest release, the line is blurring even more.

Internet tablets are not new to Nokia.’a0 In recent years we have seen the N770, N800, and N810 models make their debut.’a0 The most recent Internet tablet from Nokia, the N810, has been out for about a year and a half.’a0 This device features a large 3.5″ touch-sensitive screen, connectivity to the Internet via Wi-Fi and Bluetooth, a front-facing camera for video conferencing, a full QWERTY keyboard and expandability via SD cards.’a0 On the software side, Nokia Internet Tablets come installed with everything you need to interact on the ‘net including an email client, web browser, IM client, Skype, and a traditional VoIP client.

Internet tablets are popular with the open source crowd because they run Maemo, Nokia’s Linux-based operating system.’a0 While the tablets have been popular with the geek set, they have yet to catch on with a mainstream audience and have experienced good, but not great, sales figures.

Enter the N900, Nokia’s newest Internet Tablet which adds some smart capabilities onto the already healthy feature set of the previous Internet tablets.’a0 The N900 adds: 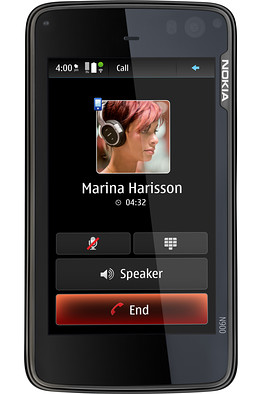 So, all in all, the N900 appears to be a strong player in the Mobile Internet Device market.’a0 Could the Nokia N900 be the perfect pocket-sized computer?’a0 When the device debuts in October, we hope to find out.

So far, the N810 for me has been a great device to be connected to the Internet when lugging around my laptop isn’t convenient.’a0 Also, the N810 is great as a media playback device on an airplane with its compact size and perfectly sized screen.’a0 However, I’ve always desired the ability access the net via 3G and to make calls from my Tablet.’a0 With the N900, this appears to finally be possible.

What are your thoughts on the newest Nokia Tablet?’a0 Please reply via the comment section below or via Twitter.