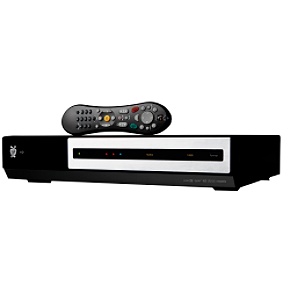 After having a DirecTivo for many years, I grew to love the TiVo.Â It’s intuitive, easy to use, and makes finding and recording TV shows a snap.Â Then, in early 2007, I acquired an HDTV and switched from DirecTV to Comcast because at the time, Comcast had better HD programming.Â Now as you all know, times have changed.Â DirecTV has almost 100 channels of HD programming compared to Comcastâs like 10, but that’s another story.

With the switch to Comcast, we got a Comcast DVR.Â Going into it, I figured it’d be mostly the same, just a different sequence to do the easy tasks of finding and recording shows.Â Whoa was assumption wrong.Â I won’t go into it very much, but to sum up: the Comcast DVR is a nightmare.Â The user interface is clunky.Â The DVR gets all confused and “forgets” that IÂ press keys, meaning we press a key and it queues them all up and executes them at once.

TiVo has a Series 3 DVR that does HD, but up until late last year, the Series 3 costs around $400-500.Â However the released the TiVoHD, a stripped down Series 3 that has all the essential components of the Series 3, just a little less storage space and the fancy OLED display on the front.Â These are add-ons I am very willing to sacrifice for the much lower price.Â The list price for the TiVo HD is $299, however I see them on Amazon often for as low as $230.

When my review unit came from TiVo, I opened it up and saw the normal looking TiVo box along with a Wi-Fi adaptor.Â This was the first time I’ve seen the TiVo use Wi-Fi to get its programming data.Â Pretty damn smart, if you ask me.Â The Comcast and DirecTV DVRs get their data over the wire through their coax connection.Â Using Wi-Fi, TiVo gets its data quicker and populates the programming guide much faster.

I hooked the hardware up and walked through the set up process.Â The TiVo first asked me about my wireless network and instantly hopped on.Â I often have more trouble with devices on my wireless network because I use WPA encryption, but the TiVo handled it with no issues whatsoever.Â There is a fantastic intro video that comes on after you set up the device to show you how to use your new TiVo box.Â The set up process was seamless and easy.Â You can definitely tell it was engineered for people who are not technical. i.e., my mom could have set up the TiVo easily without having to call me 🙂

I then set up the TiVo with all my season passes, which is TiVo speak for telling the TiVo to record all your reoccurring series.Â The process was intuitive and care-free.Â One new feature that I love is when recording an event that might go long like a sporting event, parade, or like show; the TiVo says “This live event may exceed it scheduled time, would you like me to record an extra half-hour?”Â Brilliant!Â Simply brilliant.

The TiVo HD has dual tuners, meaning you can record two shows simultaneously.Â This is a very welcome feature when you have two shows on the same time.Â You can easily record one and watch the other.Â Also, the TiVo HD has 250 GB of storage.Â I never even approached the TiVo’s limit, even when I was gone for a week without watching TV.Â A new firmware upgrade means you can even add on to the TiVo’s storage by supplementing with an external hard drive.

The TiVO HD exceeds any other high definition DVR platform in terms of usability, stability, and the “fun-to-use” factor.Â I had the Tivo for 2 months and I never had to restart it.Â On the other hand, I have to restart my Comcast DVR once every two weeks because it becomes un-responsive.

After trialing the TiVo out, I would recommend it to anyone who wants DVR functionality in their home.Â It may cost $12-14/month for TiVo service, but it is worth every penny.